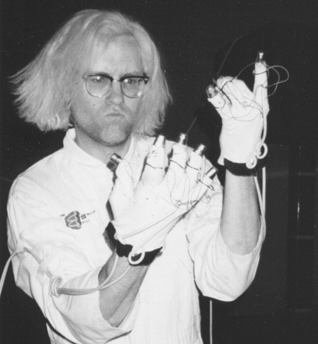 You're probably looking for the short version of what The ECC is. If only there was a well-known genre The ECC could be simply pigeonholed into, it would be a lot easier... Plagiarhythm? Plunderphonics? The Godfather of Mash-up? Collage? Many of those terms suggest just another laptop artist, and yet nothing could be further from the truth.

"COPYRIGHT VIOLATION FOR THE NATION."

The ECC is a "band", but like none you've ever seen or heard. No drums, guitar, bass, or even synth or sampler. The ECC performs with custom- built equipment to give the audience a truly original experience. When was the last time you saw a show performed by a guy wearing 10 ordinary thimbles wired into some electronics, which trigger everything? In the world of The ECC's music, Public Enemy duke it out with Herb Alpert while Dan Rather is the new frontman for AC/DC. It's fun without being comedy, sample-based without being techno, and brainy without being arty. Works equally well in bars or galleries!

In 1996, The ECC released what was probably the first ever "bootleg" when they mixed the angry, attitude-drenched vocal track from Public Enemy’s Rebel Without a Pause with a whimsical, happy-go-lucky Herb Alpert tune. Originally available on the San Francisco label, Eerie Materials, this ground-breaking record was reissued on Pickled Egg in 1999, a full two years before the emergence of the bootleg/mash-up scene, which would eventually have an impact on the UK Top 40.

One of the most notorious ECC products is Rocked By Rape, which combines soundbites from CBS newscaster, Dan Rather, with music from AC/DC’s Back in Black. The record had to be withdrawn because of legal threats from CBS, although the ECC still perform it live.