Pickled Egg Records, in association with The Phoenix Arts Theatrepresent: 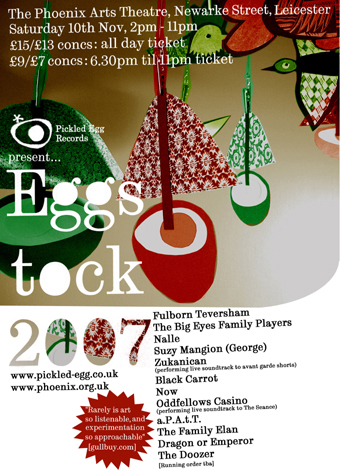 Leicester-based Pickled Egg Records is one of the most sharp-eyed, adventurous independent labels around, releasing some of the best music of any label, anywhere. Eclectic to a fault, and firmly out of step with current trends, since it's inception in 1998, it has dedicated itself to redressing the world’s musical balance in favour of quirky genius, bent tunefulness, noisy playfulness, jazz turmoil, inventive retro-futurism and downright emotional heart-on-sleeve belief, hope and passion. In a world in which the musical balance is already, irretrievably, weighted down on the side of corporate flatulence, labels like Pickled Egg are so a priori unnecessary, and yet so a posteriori essential.

"Any label can attempt to be the strange kid, signing a bunch of oddballs with "diversity" in mind, but Pickled Egg isn't just in it for the gimmick. These miscreants deliver entire selves in their work; the only lame part of the deal is finding enough time in the day to absorb each of these wonderful bands and check out all their music" [Spendid Ezine]

"Since 1998, Pickled Egg and its artists have represented a very rewarding, particular form of eccentricity. There's so much to dip into - an embarrassment of riches, a cornucopia of found sound, Beefheartian rhythms and soulful singer-songwriters - that it's difficult to know where to start. Think of Pickled Egg as a primer to the more radical side of Plan B's musical coverage: oblique but still very accessible" [Everett True, Plan B]

"With the music world struggling to find its next wave or trend, Pickled Egg has created a label that lives up to its own promotion and standards of avoiding trend and carving out its own niche of the highest artistic order. Rarely is art so listenable and experimentation so approachable" [gullbuy.com]

This showcase celebrates the brilliance and diversity of the label's roster