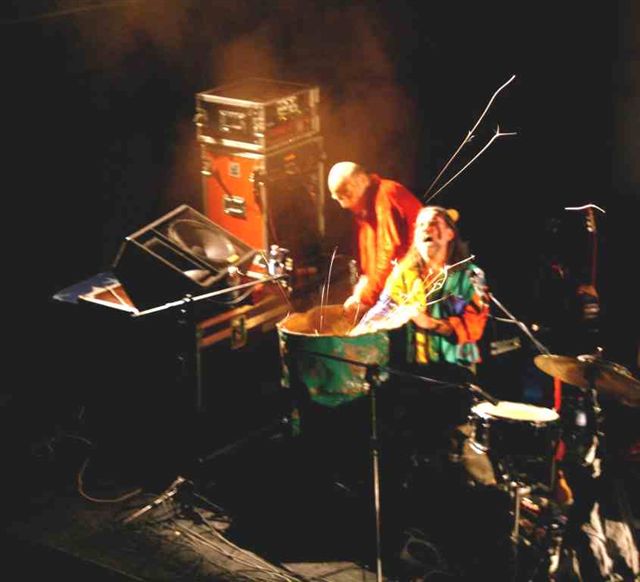 Pioneers of 'Kraut Rock', iconoclasts extraordinaire, FAUST are key figures in 20th Century music. In the early 70's, along with Can and Kraftwerk, they re-invented pop music as a specifically European art-form. Virtually imprisoned by Polydor in their own studio for two years, they were able to revolutionize the whole process of musical production; they improvised with Industrial noise, generated bizarre hypnotic grooves, indulged in shockingly wilful studio-based collages, and dabbled with every conceivable musical genre, sometimes simultaneously! Every now and then they found time for a burst of satirical pop, or occasional waves of delicate ambience. Amongst those Faust have strongly influenced we must count Brian Eno, Joy Division, Cabaret Voltaire, Test Department, Neubauten, My Bloody Valentine, Julian Cope and a host of Industrial and Techno bands. The music has lost none of it's immediacy or relevance - it sounds as if it was recorded last week, not last decade. The line-up for this show includes original members Zappi Diermaier and Jean-Herve Peron.

"There is no group more mythical than Faust" [Julian Cope]

"Faust are essential, not just as a history lesson, but as a living legacy and as a reproach to an underachieving age" [The Melody Maker]

NOW are an east London based ensemble, who fuse elements of krautrock, free jazz, lo-fi, synth pop and music from various ethnic sources, to create their own unique, highly inventive sound.    If art-pop is a term with any currency, Now would be somewhere between Pollock and Kandinsky – free-flowing yet structured, vivid yet soothing, bold yet with numerous untold hidden depths. Musically, they’re all over the shop, yet manage to steer clear of sounding like a mere mesh of disparate influences badly thrust together – seemingly because they not only have a great understanding of the rhythmical heart in everything (all music is dance music, etc), but can apply it to their own restless, driving sound. Depending on mood, whim and venue, Now pursue a range of styles, from experimental improvised sounds to rhythmic, dance-y, driving pop music that often transforms into extended percussive jams, in which the audience sometimes participates. Now could be described as catchy, contemporary, inventive, exotic, melodious and harmonious 21st century pop music. The group released their debut album, ‘Frisbee Hot Pot’ on Pickled Egg in June 2006, and made a big impression on Leicester audiences last year, with fine performances at Summer Sundae and Eggstock.

BLACK CARROT hail from the sleepy market town of Market Harborough, where they have clearly evolved in splendid isolation. A trio with drums, bass and saxophones, they play a fierce, largely improvised set of what they themselves style krautrock-inspired space jazz folk. Certainly, if you have any fondness for Can or Faust, or perhaps more recently the American band Morphine, you are going to find something to love about Black Carrot.