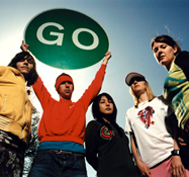 Lodged somewhere in the previously undiscovered zone where Sonic Youth meets the Jackson 5, The Go! Team kick out the jams and then spread it on crumpets for tea. It’s hand-brake-turn music, it’s doing the ton, its double D-ing the clutch in a Dodge Challenger. Its goddam, mo'f**king energy.

The group have been receiving well deserved critical praise for their recent EPs on the Memphis Industries label, who are also releasing their debut LP, ‘Thunder, Lightning, Strike’ in September. However, as always, it was Pickled Egg who got there first, releasing the debut Go! Team EP, 'Get it Together' way back in August 2000.