The mighty and mysterious HASSLE HOUND - spanning Glasgow, New York and Warsaw - conjure up a sophisticated mess of complimentary contradictions, voraciously sampling everything in their paths. Over their short but prolific career, the three piece of Tony Swain (guitar, loops, samples) Mark Vernon (loops, samples, electronics and balloons) and Lizzy Swimmers (Violin & Vocals) have built an impressive and eclectic body of material - with releases on Staubgold, Pickled Egg, Textile and Twisted Nerve - inviting comparisons to artists as diverse as The Books, The Durutti Column, This Heat, and soundtracks to films such as the Wickerman, Midnight Cowboy and the work of Ennio Morricone. The group have played extensively in the UK and France, alongside the likes of Melt Banana, Vibracathedral Orchestra, Knifehandchop, Scatter & Volcano the Bear.

"Hassle Hound are a benign tornado, roaring and twisting through the best and most eclectic of record collections, ripping out and tearing off ideas and samples. They plunder for a reason -- to make fragile and lovely music, often charmingly odd but with a gleeful melancholy, off-kilter but on the ball. There is a childlike quality to their music, but the child in question must be a musical prodigy with a wry sense of humour and a maturity beyond his years. They are not afraid to be beautiful. Machines and beats are caressed into soft humanity by delicate vocals, the boisterous cuddle of eccentrically-played instruments and ingenious guitar patterns. Here are wistful love songs which also sound like the greatest James Bond theme ever (if those films had ever been made by a 60's new wave Czech director). Cartoon oneirics slapstick their way across lush countryside and toddle through town, favourite-uncle drunk and beaming expansively. Trying to pin them down is like drinking beer with a fork. They coin new genres like other bands do sound checks -- too much funky not enough, crofter dub, genial noise, surf and turf guitar, carousel gothic, collagetronica. If Harry Partch had made music for ice-cream vans it might have been like some of these affable inventions" [Forced Exposure]

"These folks delight in genre defying. Their extensive use of odd samples recalls People Like Us, musically they resemble a whimsical jazz band playing toy instruments, Young Marble Giants demos, or Cale era Velvets in a mellow mood, and surrealistic electronic loopery flailing it's tendrils at the moon with a real band bubbling under the surface. Easy listening strings circle and cycle, while antiquated radio voices read fairy tales, or fragments of children's stories. Bright, colorful, upbeat with stoned candy puzzles, and collaged delights in the corners, and running along the hedges" [George Parsons, Dream magazine] NOW are an east London based ensemble, who fuse elements of krautrock, free jazz, lo-fi, synth pop and music from various ethnic sources, to create their own unique, highly inventive sound.  Justin Paton’s incorporation of home made lo-fi with intricately crafted songs, combined with percussionist Giles Narang's understated relentlessness and intense attention to detail create the basis for the Now-sound.  If art-pop is a term with any currency, Now would be somewhere between Pollock and Kandinsky – free-flowing yet structured, vivid yet soothing, bold yet with numerous untold hidden depths. Musically, they’re all over the shop, yet manage to steer clear of sounding like a mere mesh of disparate influences badly thrust together – seemingly because they not only have a great understanding of the rhythmical heart in everything (all music is dance music, etc), but can apply it to their own restless, driving sound. Depending on the audience and venue, Now play a range of styles from experimental improvised sounds to rhythmic, dance-y, driving pop music that often transforms into extended percussive jams in which the audience sometimes participates. Now could be described as catchy, contemporary, inventive, exotic, melodious and harmonious 21st century pop music. The group released their debut album, ‘Frisbee Hot Pot’ on Pickled Egg in June this year, and have made a big impression already on Leicester audiences in 2006, with fine performances at Summer Sundae and Eggstock. 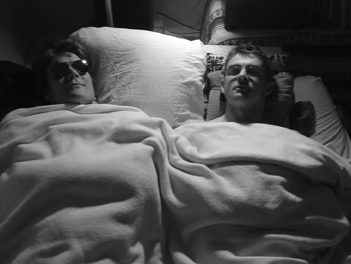 DRAGON OR EMPEROR are the awesome two-piece lightning-bolt drum & bass assault of Aaron Moore (Volcano the Bear, Songs of Norway) on drums/vocals, and Stewart Brackley (Black Carrot, Songs of Norway) on bass guitar/vocals. Somewhat akin to a geeky Lightning Bolt in charity shop suits loosening up and playing jazz-metal, with additional manic Pere Ubu-style vocalisations, Moore beats absolute hell out of his drumkit, whilst Brackley embarks on daring fretless excursions to the absolute edges of what constitutes a rhythm.  An enormous sound that marries their intense mixture of fun and chaos.  Moore and Brackley have been friends for over 20 years, and have previously played together (along with fellow Volcano the Bear member, Nick Mott) in the improv jazz trio, Songs of Norway (Beta Lactum Ring Records).  However, it was when Moore heard Brackley sing for the first time -  with Black Carrot – that he knew the right thing to do....... form a band with him, and explore his new found voice. The debut self-titled Dragon or Emperor album is available now from Pickled Egg.

“Dragon Or Emperor never know what to say. They sure know what to play. Fuzzed-out bottom-heavy iron-clan stoner-rock, over-hyphenated and crazily-vocalled. In the gaps between the riffs the dragon, or perhaps the emperor, surely on a mixture of helium, nitrous oxide and something seriously hallucinogenic, tries to get the words out. Occasionally, he manages to do this. More often he sounds like an out-take from a particularly weird episode of the Goon Show. And then the riff kicks back in. Full marks” [Jimmy Possession, Robots & Electronic Brains].