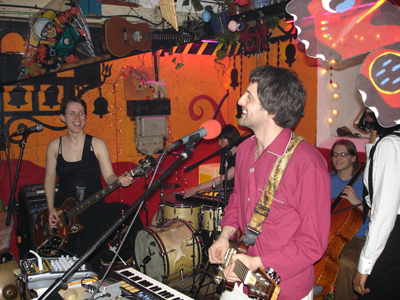 In London, 1998, songwriter Justin Paton thought up a new group called NOW, so regular rehearsals were arranged with friends helping out on various instruments and NOW was born. Along the way the NOW line-up has evolved to include the following:

On "THE HEPADABOO", their second studio album released by the Japanese label Flau, NOW are delving further into the unexplored regions of off-beat pop music. An EP named "OISHEEDY ANNA" is also out on Discordance records and their first album, named "FRISBEE HOTPOT", was released in 2006 on Pickled Egg records. Before releasing their first album, NOW worked with visionary underground musicians such as Can’s Damo Suzuki (a joint album was released on TRI recordings in 2007, named "THE LONDON EVENING NEWS", and got a rave review in The Wire magazine), Charles Hayward (This Heat), Salvatore (Norway's motorik masters), Kaori Tsuchida (The Go! Team), Hugh Metcalfe (London's The Klinker club), Resonance Radio, the Kosmische club and Man From Uranus, and regularly appeared on CD and vinyl compilations. Their sense of adventure continues to attract interesting collaborations, and has earned them support slots with bands such as Faust, Circle, Tunng, Psapp, Rothko, Plaid and A Hawk & A Hacksaw. In February 2008, The Stooges’ Mike Watt dedicated an entire radio show to their music. NOW will appear live in Japan and South-East Asia in 2009 as well as more performances in Europe. NOW could be described as catchy, contemporary, inventive, exotic, melodious, harmonious and disharmonious 21st century pop music.


Now have some live shows coming up. Check the live page for details.

"My soul, my ears and my dancing shoes thank Now, who haven’t so much as made an album as created an antidote for musical apathy. This is a band that have played with Damo Suzuki and pulled it off. Yep, that good. And Frisbee Hot Pot is one of those albums that, if art-pop is a term coming back into fashion, would be somewhere between Pollock and Kandinsky – free-flowing yet structured, vivid yet soothing, bold yet with numerous untold hidden depths. Musically it’s all over the shop, of course, yet manages to steer clear of sounding like a mere mesh of disparate influences badly thrust together – seemingly because they not only have a great understanding of the rhythmical heart in everything (all music is dance music, etc), but can apply it to their own restless, driving sound. And as the whole album winds itself slowly to a halt, you know it is a journey colourful, perplexing and astounding enough to warrant many return trips. Inspired and inspiring" [Drowned in Sound]

"Did you ever wish Stereolab would just stop with the wussy leopard-skin lounge exotica and get thoroughly stuck into the krauty riffage? If so, you probably have to hear Frisbee Hot Pot. There are grooves on here so deep that bathospheres have been lost exploring them, so repetitive that they're being considered as a cure for autism. This is no macho endurance test though: just listen to 'Little Bits Inside of You' and its cheeky Human League synth-funk and snooty girl-sneer. Opening track, 'Abominatrx,' is an eleven-minute journey from inept jerk-pop through a squelchy Brazilian robo-party, ending up in some kind of trombone comedy march. Elsewhere there are withered trumpets, fey breathings and heavy, heavy drum breaks. Ritalin pop, perhaps?" [Plan B]

"On their latest album, the seven-piece band Now are joined by a whole army of percussionist whose combined skills fill out the sound of the songs completely, no more so than on the opening track "Abominatrix" which build from pop song to street carnival in a delicious manner and will definitely get you feet moving. Elsewhere there is a Talking Heads/Eno groove to the songs with the bass-lines becoming central to the song, with the musicians playing tightly together, creating tension, whilst retaining a loose feel, (a good trick if you can do it). Throughout the band are not afraid to experiment with different rhthyms, the vocals telling stories, and the well-rehearsed grooves allowing the other instruments plenty of room to improvise, bringing to mind bands such as Rollerball, Caravan, and The Comsat Angels, although these are mere echoes to be found in a collection of original and high quality songs" [Ptolemaic Terrascope]

"Sleigh bells shickle like Mr T. in full tilt, and from there, through recorders, cyclical harmonies and synth hum, a locked-in, sweet and tender little groove develops, growing like ivy, capturing all sorts of other instruments and patterns as it spreads in all directions. Not a bad opener, then, and it is one of two 10 minute tracks that fully showcase their artistry and spin. All the other tracks are snippets by comparison, but equally visionary, e.g. ‘Excited Lobo Crown’ has a desert funk twinkle; ‘The In-Case’ clatters like a chainsaw through a back-alley bin; ‘Calanized’ clings onto a spy-drama wubble’; and ‘Pachinko’ is a juddery slink firing off an Atari electro-trickle. This record has free-jazz spirit, elements of twee, a post-rock stubbornness while it often swims with African guitars. A floating, gliding LP that is, nonetheless, perverse in outlook; soaring, dipping and jolting regularly" [The Vanity Project]

from eMusic
Listen to Frisbee Hot Pot on Last.fm