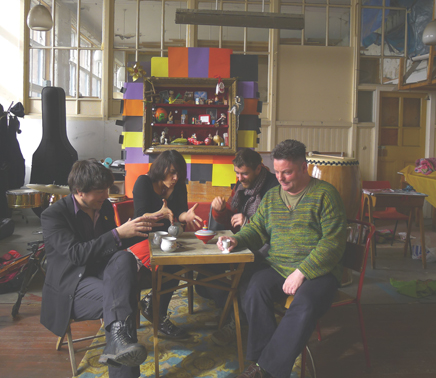 A Basque singer, a Welsh violinist, a bass player from Bolton and a drummer who is also a puppeteer - it could only be Tattie Toes. Meet one of Glasgow's most interesting bands...

Tattie Toes is a group: Nerea has a singular power and expressiveness to her voice, yet there is delicacy and great subtlety to her singing; Shane’s virtuosic drumming has been described as ritualistic, but containing jazz and folk elements too; Rafe is also folk influenced, but with a heavy underlay of drone, scratch, pastoral and scuzz; Howie’s bass playing has been described as ‘avant spaz’ and Mike Watt-esque.

So how did Tattie Toes come together?

Howie: "Shane and I had been playing together for a while, and I wanted to work with Nerea as soon as I heard her sing. We got together and just improvised for months and months, until Rafe joined us and we decided it was time to try and put some songs together. We all came from different persuasions – Nerea was in a band called Zuba, who you’d perhaps term world music, while I was in Maxton Granger, which used two basses and could loosely be called indie – so that was healthy in terms of broadening the band’s sound. You know how everyone’s into the same five or six bands when you put your first group together? Well that wasn’t us"