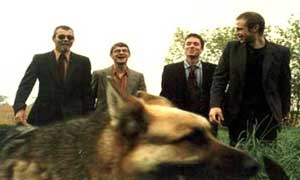 Volcano the Bear was formed in May 1995, in Leicester, England, by Daniel Padden, Laurence Coleman, Nick Mott and Aaron Moore. These four musicians encountered frustrations with the limitations of traditional musical endeavors and sought an outlet that could defy convention. Volcano the Bear quickly became the platform for their total artistic freedom and personal expression, where they could explore collective ideas and interests in a new and inventive manner.

The music that came forth from this collective ideology was a beautiful cross-section of the English underground of years past (Robert Wyatt, This Heat, Nurse With Wound) alongside the rhythms of Can, the trickery of Faust and a Residents-like surrealist bent. Volcano the Bear adapt these lofty inspirations into a sound that is distinctly their own creation, one that blurs the lines between songs, composition, noise and improvisation.

Volcano the Bear’s own Volucan imprint was home to their first recordings, released in limited cassette and CD-R formats. Glowing reviews in magazines like The Wire and Audion quickly expanded the group’s fan base, and soon Volcano the Bear released the mini-LP Yak Folks Y'are on the Pickled Egg. Devout fans included United Dairies/Nurse With Wound mastermind Steven Stapleton, who made Volcano the Bear the first non-NWW release on his label in nearly a decade. Their first US release was The One Burned Ma, on the Misra label

Following a wildly successful U.S. tour with labelmates Bablicon, Volcano the Bear were back at work, recording another album for United Dairies. This release, titled Five Hundred Boy Piano, preceded a slew of Volcano the Bear releases, including reissues of Volfur, Volve and Volseptor on the Beta-Lactum Ring label. Also issued was the 10 inch record, Guess, a super-limited "art album" titled The Mountain Among Us and live CD-Rs Volnono and Xvol, all courtesy of Beta-Lactum Ring.

Volcano the Bear have also been at work on other projects, including Moore and Mott’s Songs of Norway. Coleman also saw the release of two solo recordings, under the moniker Earth Trumpet. Both are fantastic, with one being a proper CD on Cenotaph Audio and the other a CD-R on Beta-Lactum Ring. Not to be outdone, Padden has also released solo albums, as The One Ensemble of Daniel Padden, and Moore and Coleman have collaborated with Bablicon's Jeremy Barnes under the name of Guignol.